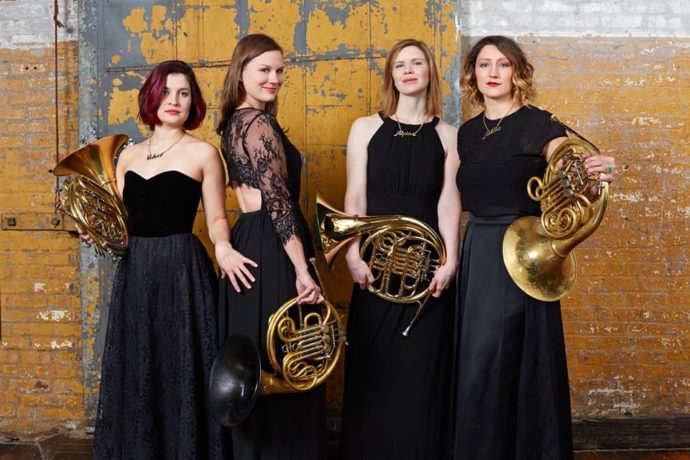 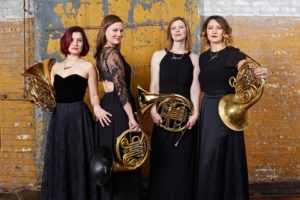 PLEASE NOTE – ADVANCE TICKETS FOR THIS SHOW HAVE SOLD OUT. THERE WILL BE LIMITED, FIRST COME FIRST SERVED TICKETS AT THE DOOR ON THE DAY OF THE SHOW (Doors at 6:30pm)

With a combined 24 years of conservatory training, Genghis Barbie delivers to you a visceral and unadulterated musical adventure. Performing arrangements of pop music from the 70’s, 80’s, 90’s, 00’s and today, contemporary commissions, and classical works, they are the most versatile and expansive group on NYC’s classical/pop/rock/jazz/indie/alternative/punk/electro-acoustic scene.

Genghis Barbie was incepted in a unique moment of ingenuity when Freedom Barbie, Alpine Barbie, Velvet Barbie, and Attila the Horn converged and vowed to create distinctive, interactive and personal performances.
In addition to their busy New York City performing schedule, the ladies of Genghis Barbie have performed as Featured Artists at the International Horn Society Symposium in Ghent, Belgium in 2019, and were Contributing Artists at the 2011 and 2015 symposiums in San Francisco and Los Angeles, respectively. They performed Schumann’s Konzertstuck with the Southern Methodist University Wind Ensemble and the Holland Symphony in Michigan, and appeared on America’s Got Talent. In May 2012, Genghis Barbie premiered a new concerto for four horns commissioned by the New York Youth Symphony in Stern Auditorium at Carnegie Hall.

As educators, they have toured numerous universities and symposia, presenting workshops, masterclasses, and lectures on musical entrepreneurship.

They have released five studio albums: the self-titled debut album, the holiday album “Genghis Barbie: Home for the Holidays,” “Genghis Baby: Songs for Noa,” the pop album “Amp it Up!”, and the newly released all-classical album “2 Legit.” Genghis Barbie aspires to appear on the Ellen DeGeneres show within one calendar year.