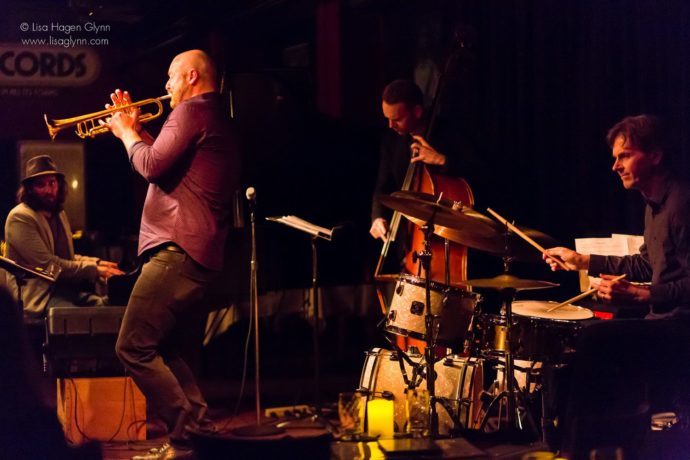 Doors at 7:00pm
$12 adv/$15 dos
To guarantee a good seat, please make your dinner reservation by emailing reservations@theroyalroomseattle.com
Advance tickets can only be purchased online. We do not sell advance tickets at the venue. Refunds are not available within 48 hours of the event.

The Jared Hall Quartet performs with featured guest pianist Tal Cohen, from Miami, FL, performing an exciting evening of original compositions and jazz standards – music in its most organic, spontaneous and creative form!

About Cohen:
Now based in the US, Tal Cohen’s unique piano style owes its roots to the Jewish folk songs and classical music he played in his formative years growing up in Gedera, Israel. He graduated from WAAPA in 2008 and immediately began accumulating awards and prestigious performance opportunities. He was the 2015 winner of the Freedman Fellowship Award and in 2014 won the Barry Harris Piano Competition in the US. His recent album ‘Gentle Giants’ has received overwhelming attention including a 4 star review from the acclaimed Downbeat Jazz Magazine.

He has become a regular performer with iconic jazz figures such as Terence Blanchard, Greg Osby and Robert Hurst and continues to tour the world performing his unique brand of improvised music.

Since moving to Seattle, Hall has performed with the Seattle Repertory Jazz Orchestra, Symphony Tacoma, Ron Jones’ Jazz Forest, the 5th Avenue Theatre and many of the regions outstanding ensembles. His quintet, featuring original music, held a monthly residency at Tula’s Jazz Club for a number of years and performed at the 2018 Gene Harris Jazz Festival. As a clinician and educator, Hall has served Boise State University, Bellevue College, Pacific Lutheran University, Whitworth University, Eastern Washington University and Western Washington University, in additional to many local high school programs and jazz festivals. Hall is an endorsed artist with VanLaar Trumpets & Flugelhorns and AR Resonance Mouthpieces. He serves on the faculty at Northwest University and Tacoma Community College.