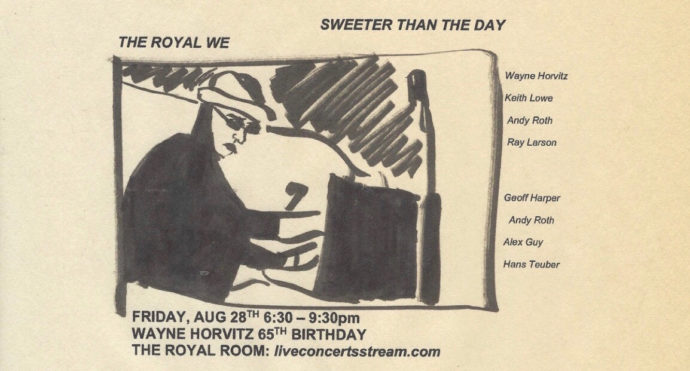 August 28th will be a very special and unique online party for Wayne Horvitz’ 65th Birthday.

The Royal We first started as the informal late-night group at the Royal Room lounge. The music is vastly improvised and culminates from motifs and compositions by Wayne Horvitz as well as inspirations from African pop music, 60’s modal jazz and open improvisational forms. With a rapport of weekly sessions, the group members share a long time standing with each other and the in-formalness of their culmination makes for spontaneous music and a unique openness.

Sweeter Than the Day

Formed in 1999, Sweeter than the Day began simply as the acoustic incarnation of Zony Mash. The band played a series of weekly shows at Seattle’s Baltic Room (curated by Reggie Watts), and quickly became Wayne Horvitz’s first piano-based ensemble in over 10 years, and one of Wayne’s longest-running groups, as well as one of his favorites. Despite the shared personnel, the ensemble is quite distinct from the electric Zony Mash and the repertoire is almost entirely different. The band has toured throughout the US, Canada and Europe. Sweeter Than the Day also presents double bills with Robin Holcomb, where it serves as Robin’s backup band.

‘On piano, Horvitz is economical yet lyrical, never venturing far from the strong melodic hooks which characterize his compositions, but constantly working small surprises.’
The Wire (UK)