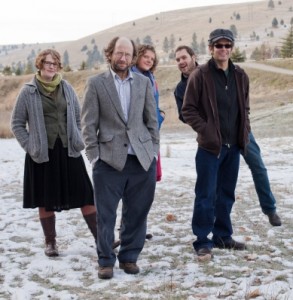 Award winning writer and environmental activist Rick Bass has been called a  “chronicler of western wilderness”. This Thursday, Bass and Missoula based band Stellarondo will reveal their latest form of collaborative storytelling to Seattle audiences in  “An Evening of Songs and Scored Stories”. We talked with local poet Frances McCue, who helped to organize the event, about what to expect:

How would you characterize Rick Bass’s work?

Rick Bass has written loads of books, both fiction and nonfiction. I admire his writing about place— he makes resonant connections to whatever patch of earth he is writing about. What I love is how he gets you to reconsider not only your relationship to place, that crusty old idea, but how he gets you thinking about finding a place that suits your temperament and your own advocacies in the world. Move to where you need to be. That’s what Bass did. He was from Texas and now he lives in the Yaak Valley of Northwestern Montana. He was arrested two weeks ago in front of the White House [for] protesting the Keystone Pipeline, slated to bring oil from Canada’s dreaded Tar Sands to refineries in Texas. Because Bass once worked as a petroleum geologist, he knows the world of big oil and flipped his career into writing. Good for him.

What do you know about Bass’s collaboration with Stellarondo, which merges writing and storytelling with live music and performance?

Stellarondo describes their music, combined with Bass’ writing, as “a bass, and a pedal steel guitar can give us both the high winds, falling branches and crowning trees of a wildfire and the scream of the chainsaw cutting a way through it.” Not too much crazy shit like chainsaw squeals, but surely enough sinister, red dirt ruts to ride through, with a weird breeze at your back.  Love it.

In interviews Rick Bass often emphasizes the importance of being engaged with the world as crucial to sustaining a meaningful writing practice and life. I liked thinking about that in terms of these performances, which bring storytelling to venues like the Royal Room, where people are also known to dance and drink and get loud. You helped to organize this event – why did it make sense to present it at the Royal Room instead of a literary venue?

The Royal Room is a pleasure production space where imagination about music includes a “drop on in and hang” vibe that other podium-led venues don’t. Gotta be at the Royal Room. The music is key here; Bass is a sparkly ornament that hangs off it. You gotta love that! Writers are so hermetic that typically, when they go out they have to be the whole act. Not here. Music. I’m totally psyched.

Rick Bass and Stellarondo will perform live at the Royal Room this Thursday, March 7th, at 8PM, as part of their CD release tour.