Soon after the Royal Room opened its doors in December 2011, the Royal Room Collective Music Ensemble was born. Truly embodying what the Royal Room is all about, music and community, the group consists of some of the city’s most creative players. Next week, with over a year of regular nights at the club under their collective belt (watch videos of  some  shows  here),  the ensemble will embark on their first ever “tour” with a trip to New York City for a week-long residency at John Zorn’s renowned creative music gallery, The Stone  – May 21-26.  Below, bandleader Wayne Horvitz  talks about how the group started and what it has become. READ ALL ABOUT IT: 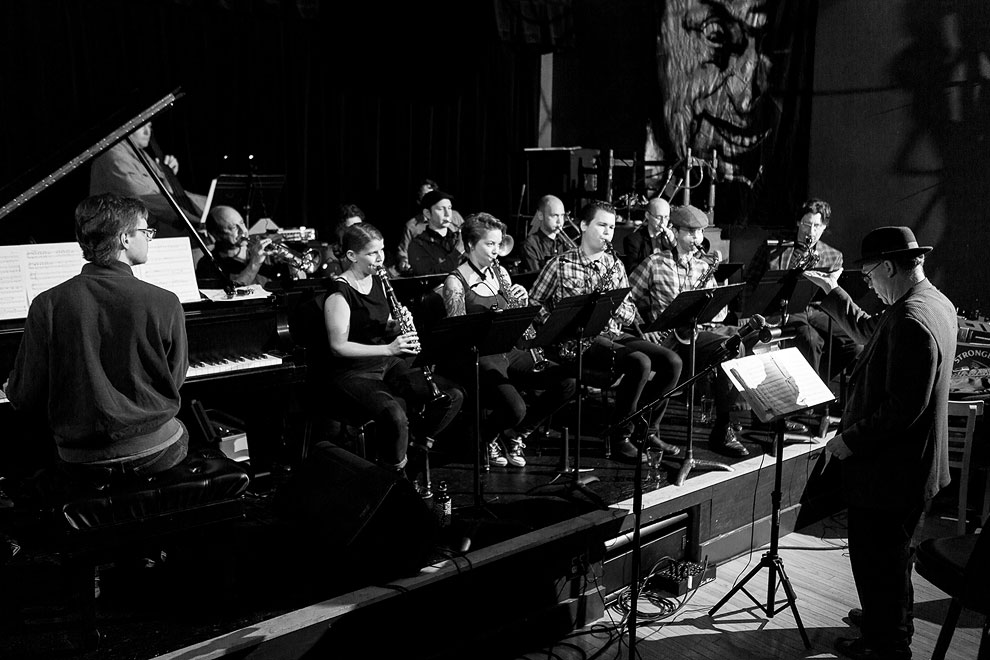 Sometimes RRCME is referred to as the Royal Room “house band”. Why is that? What does the group represent for the club?

A couple of reasons. One, a lot of the players in RRCME are involved in various other projects that come through the Royal Room a lot, in all sorts of variations. For example – Sam Boshnack’s quintet played last week. Geoff Harper and Eric Eagle are in all sorts of groups that play here. Beth Fleenor curates a Monday night once a month, and so on. I think the other reason is that we play twice a month on Mondays, which have become a kind of “musician’s” night, when people don’t worry as much about audience numbers and can really stretch things out. I’m hoping Mondays become a night where musicians just turn up to see what’s happening.

What is most exciting to you about this project, and why did you choose to bring RRCME to The Stone for your residency?

When Zorn asked me to do a week at the Stone there were so many things I could have done, mostly with NYC musicians. But I just felt like this band was really creating a sound –  it sounded like a real band, not just a group of great players, and it was developing so quickly. I also honsetly feel like there are so many tremendously interesting players in Seattle that no one hears about in NYC, or beyond. So that was another motivation.

This is the first time that RRCME will be going “on tour”. Do you see doing more in the future?

Well, I’d love too. Frankly the economics are really tough with this large a band, but the music certainly deserves it. I also have been taking the music to other large ensembles in other cities and that had been fantastic, but it’s not the same. The band is really special, I feel.

The recently passed Butch Morris was somewhat of an inspiration for this ensemble. Can you talk about that?

It’s funny, I could burst into tears just thinking about how much I wish Butch could hear this band, and even more that all of the musicians in the band could have met him. I never really wanted to do much “conduction” myself, per se. I feel more like a composer when I lead ensembles. In this band we play my charts and I take just a fraction of Butch’s language, along with a few things of my own, and try to make it happen. Historically it’s interesting because back in the day Butch started by taking bits and pieces of written music and working with from there, especially with the David Murray Big Band. In a lot of ways this music has more in common with what Butch was doing when I met him years ago.

The Stone and the Royal Room seem like kindred sorts of venues.

Well, we are similar in some ways, and exactly the opposite in others. It seems to me that The Stone was created in part to provide a clean and decent venue to perform in for a lot of creative artists who are on the edge, at least to some degree. All the shows are the same price generally, and there is nothing but the space and the music. When I started the Royal Room I felt that Seattle had some great venues for creative music, and good venues for Jazz and touring acts, etc., but what I wanted was a place that really served the local music community as a whole, and the South end in particular. We are a social space. We have all sorts of music. People eat and drink, and we make sure a lot of creative and improvised music gets supported in that. But we also opened the space to the Presidential Debates, and other events that connect the community. We have a Drag Brunch, a Gospel Brunch,  etc. But at its heart it’s inspired by places I used to go to in NYC when I first got there like the Tin Palace where Henry Threadgill would always be hanging out and musicians would always gather along with the audience, and after the music people would keep hanging.

And at The Stone shows you’ll be releasing a live recording, right?

Yeah, a limited edition live recording of Two nights at the Royal Room, all live. We brought in some gear and I think it sounds great!

The Stone is located at the corner of Avenue C and 2nd Street in NYC. The Royal Room Collective Music ensemble will perform May 21-26,  $15 tickets at the door. 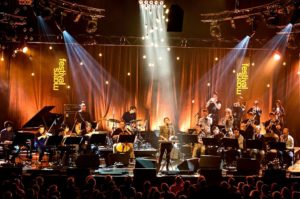 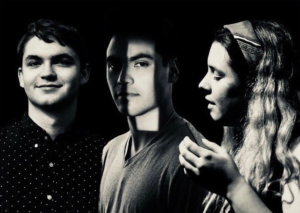