Over two decades later, we asked some of Naked City’s original members for brief reflections on the album – what it was like to play the music, and what some of their favorite  pieces were:

Joey Baron: “Blood is Thin (Prestidigitator a close second). I love that opening line in Blood is Thin. More than any one piece, I most enjoyed being part of an ongoing team. We gave each other confidence in times where we, individually, may have felt incompetent .”

Wayne Horvitz: “It’s hard to pick one. Speedfreaks was the most fun to play. I think Obeah Man is the most incredible as a piece of music – I love how the ending seems like an incomplete thought, sort of like those weird moments just before you fall asleep…and of course Perfume of a Critc’s Burning Flesh wins best song title award.”

Bill Frisell: “We were at the right place at the right time.  John brought together good friends to play some music. Torture Garden. Wayne, Joey, Fred, Patton, Eye. Wow. What a trip. I’d never played music like that before…and don’t imagine I ever will again. I learned so much. We had a beautiful experience together. ”

Tickets are $10 advance/ $13 at the door, available now from Stranger Tickets. All ages until 10 PM. Not to miss! 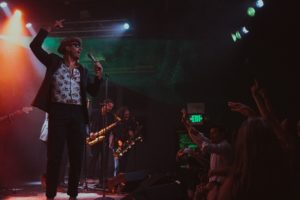 Oct 6 @ 8:00 pm
Doors: 6:30pm Lounge set, admission by donation COVID PROTOCOLS: All our staff are fully vaccinated, and we ask that our […]
Tickets
The Unknowns//Marina and the Dreamboats