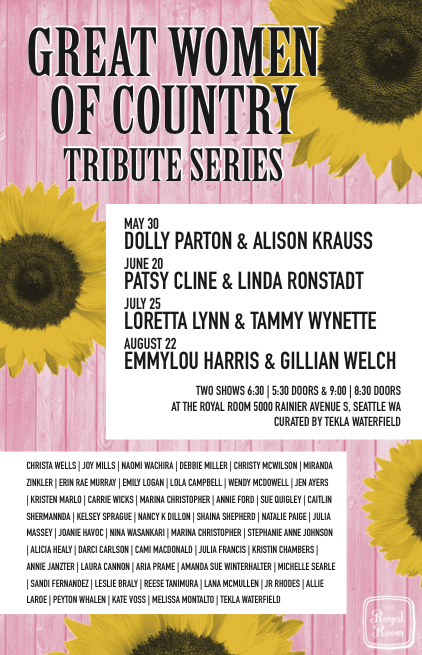 Now in its second year, The Great Women of Country Tribute Series highlights the works of some of the most prolific and talented musicians the genre has to offer. Each performance will bring together Seattle’s finest singers to reimagine the works of two featured artists. With only one installment left, be sure to grab your tickets for the August show now!

This series is curated by Tekla Waterfield

Two woman who could just as easily be described as alt-rock, folk, alternative or any number of descriptions, both have deep roots in Country and traditional American folk music. Emmylou Harris paved the way for the term Americana, Gillian Welch maybe its most successful artist of the genre.

May 30: The Music of Dolly Parton & Alison Krauss

Two iconic artists that brought country music into new eras. Dolly Parton, superbly talented with an incredible ability to turn all the assumptions about gender on its head with her sly wit and deep intelligence– “It costs a lot to look this cheap!”

Alison Krauss re-connected to the roots of country music with her stellar acoustic band, Union Station, and moved Nashville into the 21st century. Her duo album with Robert Plant not only broke expectations, but turned out to be a truly fine record, not just a clever collaboration.

Patsy Cline achieved a hit-radio presence not enjoyed by female country artists before her. Her remarkable voice and her untimely death created a country music legacy perhaps only matched by Hank Williams.

Linda Ronstadt was the California girl that brought Nashville to LA. Her incredible range and tone served all the music she performed, and she continually evolved throughout her entire career.

It is hard to get more classic country than Loretta Lynn and Tammy Wynette. Both are known for their long careers and hit making singles. Both were famous for their solo work and their legendary duos with male artists. Loretta with Conway Twitty and Tammy with George Jones. In addition, Loretta Lynn, 86 years old and still going strong, made an unexpected and brilliant recording with Jack White in 2004. 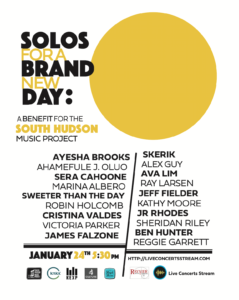 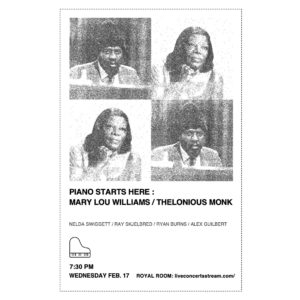