“As the opening to the Royal Room approached, I realized that there were some fundamental questions that various members of the community and the press would be asking. In an attempt to appear vaguely articulate, and consistent, I asked our office manager and booking assistant, Maren Wenzel, to ask me some questions and write down my responses.”

So why a club with no cover charge?

First, let me say very clearly, that I think musicians should get paid for their work. Furthermore, I don’t propose that the model for this venue is the right model for venues in general. I see what the Royal Room is doing as serving a very specific need that compliments the already existing venues in Seattle, many of which I am very fond of.

The no cover charge policy Thursdays through Mondays doesn’t serve a touring act, or even an established local act that can pull in a large paying crowd of fans in one of the many excellent clubs here in Seattle. What we want to do is A) support local musicians, B) make an aggressive effort to document and archive everything that happens there and C) to provide a user-friendly context for artists to present and develop new work, collaborations and more.

Finally, I’m hoping that people who wouldn’t otherwise be exposed to certain kinds of music come in to check things out. On one level we want this to be a kind of “neighborhood joint”. We also want to attract the curious but unconvinced.

Is there ever going to be a cover charge?

Yes. We’ve reserved Tuesday and Wednesdays for national acts, touring acts and other established acts. In general we hope a lot of our business will be from the neighborhood, the community at large and a lot of regulars. Remember, most nights we will be having normal restaurant and bar hours and music won’t even begin until the middle of the evening.
The approach to Tuesday and Wednesday will be different. Shows will be ticketed, the people who want to eat at the restaurant will be people who are also coming to the show and the shows will be early. I always like how in Tokyo, for example, people came straight from work to shows that started at 7 or 7:30 and were able to get home at a decent hour for a weeknight.
The logic for us as a business is that Tuesday and Wednesday will probably be relatively slow nights anyway for the bar and restaurant. People keep asking “Yeah, but what if you get a great offer from a band that can only play on a Friday night?” Well, the answer is our main mission is to create another model and so be it.

First place, I’ve always lived in the south end. When Robin [Holcomb] and I moved to Seattle in ’89 we picked this part of town kind of randomly. Partly because we had friends here, partly because the price was right, and most importantly because it was near the airport. So I’ve been thrilled to see all the great stuff that has been happening in Columbia City, and Steve and Tia now live in the neighborhood as well.
Frankly, we’ve never looked anywhere else, but in putting this project together I’ve also gotten to know quite a few members of the business and community leaders down here. It’s a great bunch of folks. We have high hopes that the easy access to light rail will inspire people to come down this way. Last but not least, the fact that the Royal Room is in the same building as the Royal Esquire Club and that they are in fact our landlords is something we are really happy with and are hoping for a long and fruitful partnership.

Are you going to be booking the club?

No. Maren Wenzel who we have brought on board to handle the music as well as some other items, including managing web content, editing and storing the audio and video content, and organizing the archival content, will be the point person for all the booking. That being said, the Royal Room isn’t really being “booked” in a traditional manner.
The music-and by the way we hope to include things beyond music including poetry, performance and other artistic activities – is often going to be presented in a residency format. This mean that people who bring projects to us that we are interested in will have weekly or monthly runs of 6-12 nights.
My role is to work with Maren with the aim of creating a culture that addresses some of the issues that motivated us to start the Royal Room to begin with. I am also going to, on occasion, have a curatorial role, in that I will approach artists with specific ideas for specific projects. Anyone interested in doing anything at the club should contact Maren through the website first.

What kind of music are you going to feature?

Duke Ellington said there are two kinds of music: good music and the other kind. This remark has been quoted far too often and obviously is in the ear of the beholder. I prefer what Townes Van Zandt said, “There’s only two kinds of music: the blues and zippity doo dah…” We’re going to try to stick to the blues.

I know you’ve mentioned cultural and political inspirations-what are they?

As the world gets smaller and the most pressing issues of the day become more and more global the words “community” and “local” get thrown around a lot, probably far too easily. Nevertheless, I am, albeit quietly, a Wendell Berry fan. I really do believe that the idea of “local” and “community” are applicable to economic models, agricultural models, etc.. With that in mind, I think its worth considering how that applies to the arts as well.
I’ve been giving a lot of thought lately to a couple of things, one very briefly, is how much fossil fuel we all consume every time we go on tour, while at the same time bitching that our leaders for not addressing issues of climate change. Number two, the disparity between “stars” and other artists seems to be getting wider and wider, just like it is in sports and business.
As our new office manager Maren recently pointed out to me, the promise of the digital revolution creating a new artist middle-class has, in fact, been just the opposite. I don’t know how to solve that, but I do know that live music is still the heart and soul of music and that there are a lot of talented people in this community who would like a place to play, to listen and perhaps most importantly to hang out.
Don’t get me wrong I still love touring – who doesn’t like to go to Italy and have people tell you you are a genius and feed you well? And I’m too much of a hypocrite to never get on an airplane again, but I do think its food for thought

What inspired you to do this?

Briefly, a lot of things, but a couple come to mind. When Tia started Lottie’s Lounge I asked her if we could do a regular project there on Tuesday nights, which later became known as Varmint. The caveat was her allowing me to leave a Hammond B3 in the club even though it took up a significant portion of her real estate. The fact that this was a side project that was fun, interesting and that we could develop casually, was one of the inspirations for the Royal Room. Needless to say, leaving the B3 on stage was another.

So what is different about the Royal Room?

While besides the no cover charge Thursday through Sunday I think the biggest item is the stage. Without sounding judgmental I think it’s a little ridiculous that if a venue has 3 bands a night 7 nights week that means they have 21 bands doing 21 sound checks with 21 drummers bringing their drum sets. For certain things it makes a lot of sense, but often it doesn’t.
I also think that kind of structure really discourages any kind of cross-pollination or collaboration between different bands or different artists. So we are going to have a permanent back line including a drum set, bass and guitar amps, a very good piano, a Hammond B3, fender Rhodes and more.
I am also hoping to keep the volume level at the club what I would call organic, for lack of a better word. I think we’ve gotten to a point where the volume in most clubs is just too loud. I actually love loud music but I don’t like quiet or medium volume music reinforced as if its rap or metal. So with that in mind we’ve created a very large stage for a club of this size to accommodate the back line. And the room has an emphasis on reinforcing the stage sound as little as possible but at a high quality. On Saturday night when we need to rock the house, we do have the gear to make that happen.
In addition, I think the presence of a permanent backline will help to encourage musicians to fall by and check out what’s happening and maybe be involved in whatever project is happening that evening. In terms of serving musicians in other way, we are also going to have a nice green room and do a stereo recording and a single camera video shoot of everything that happens. We’ve also set up the recording so that if artists want to do a more involved live recording this can be easily accomplished.

Given the state of the economy, is this a good time to start a restaurant and music venue or for that matter any small business?

The secret weapon in this whole endeavor is Steve Freeborn and Tia Matthies. In the first place let me say that the OK Hotel was hands down my favorite place on the whole planet to play. Steve and Tia have always had a way of making all their venues downhome and comfortable, attractive to artists, fun to be at, yet somehow get a lot of serious work gets done.
Sure it’s a risk, but what’s new?

So how much are you going to do your own projects at the Royal Room?

Probably a lot at first, and less so as time goes on. That being said I won’t be leading projects a lot even in the beginning, just sort of facilitating them. We are doing a Meter’s project, and Billie Holiday project, and I am talking to folks about an Electric Miles project soon. But in most of these I am arranging some of the music, but not all, and mostly I am just the keyboard player, in other words these aren’t “my bands”. And for that matter I am sure I will be subbing out even the piano chair some nights. So it will vary a lot. 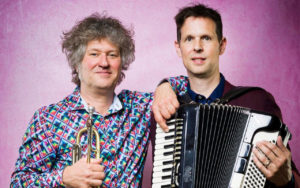 Oct 3 @ 9:00 pm
COVID PROTOCOLS: All our staff are fully vaccinated, and we ask that our patrons be vaccinated as well. Our staff […]
Tickets
The Jazz Police